Replacing your mercury fillings with a dental material that is more biocompatible and less toxic, is usually the goal of the vast majority of patients that come to see me. And I applaud each of you who actually take a proactive step to do so.

The question that usually comes up afterwards is: How do I remove the residual buildup of mercury from my body tissues?

There are many simple ways to detox, and you can actually read about many of them in my book My Secrets to Regaining Health or read through my blogs to get other helpful ideas.

However there is another simple method worth exploring. The use of NAC. 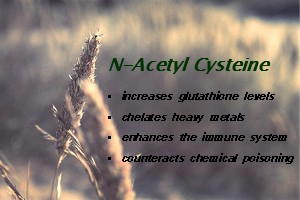 NAC (N-Acetyl –Cysteine) is a natural sulfur-containing amino acid derivative found naturally in foods. It is a powerful antioxidant. It helps the body eliminate free radicals and neutralize toxins, especially heavy metals such as mercury, cadmium and lead.

This sulfur containing amino acid is closely related to L-Cysteine, being its acetyl derivative. L-Cysteine is important for homeostasis, being a glutathione precursor, and a natural source of sulfur for metabolism. Unfortunately, L-Cysteine is unstable, and can become degraded (inactivated) while being absorbed. N-Acetyl Cysteine (NAC), on the other hand, is more stable than L-Cysteine and conveniently becomes converted into L-Cysteine after being absorbed. Thus NAC taken orally will raise blood and tissue L-Cysteine levels. As a dietary supplement, NAC is therefore a highly attractive alternative to L-Cysteine.

By supplementing with N-Acetyl Cysteine, you will increase cellular Glutathione levels, because cysteine is the limiting component in the production of Glutathione. As many of you may already know, taking Glutathione supplements directly won't do any good since it is a protein and will be destroyed in the stomach by the hydrochloric acid and ultimately be broken down into its amino acid components (glycine, glutamine, and cysteine).

Glutathione is known as the "Master Antioxidant." An antioxidant is a natural substance that removes harmful free radicals from our bodies. There are many antioxidants (such as Vitamin C, vitamin E, beta carotene, etc.) but glutathione tops them all. Fortunately, we have an amazing built in system of antioxidant power that operates optimally when properly maintained. Daily supplementation with NAC will help regulate this.

So if you haven’t already done so, I would seriously consider adding NAC (and extra Vitamin C) to your daily nutritional intake. I already have.

Reply Fran
11:31 PM on February 18, 2016
This was really helpful. I find i have lots more energy since starting the NAC and Vitamin C.

Reply anonymous
9:56 PM on August 13, 2020
This is fascinating, thankyou!
I'm prepping for pregnancy and focussing on detoxing whilst building health - what are your personal recommendations? Currently I'm thinking (in no particular order) oil pulling, Vit c, skin brushing, chlorophyll, bone broth, celery juice, green juice or smoothie, cod liver and butter oil, vit d, and then magnesium at bed. From your past blogs I'm also looking into adding diatomaceous earth, NAD and himalayan salt drinks. Do you have any other thoughts or suggestions? Thankyou!
/